Memories of a World War I Soldier

Today is Anzac Day, so naturally my thoughts turn to my grandfather, Private William Spiller #411, who fought in WWI.  He was one of the lucky ones who came back intact in both body and mind, but the latter was probably because he had firmly closed the door on the War and refused to discuss it.
He was born in Melbourne in 1896, so when the war broke out he was too young to enlist, although his older brother, Walter, did and served at Gallipoli.  My grandfather enlisted in February 1916, when he was aged just 19 years and 8 months.  When I think of the boys I know who are that age now it really make you understand how young that was.  He was posted to “A” Company, 37th Battalion AIF.  They trained for a little while in Seymour in Victoria, then embarked on the H.M.T Persic on the 3rd July.
The majority of the 1,573 troops on board the Persic had been born Australia, and had never left its shores.  I can’t even begin to imagine what they must have been feeling.  They stopped at Albany in Western Australia, but that was the last they were to see of Australia for a long time.  For some, it was the last time they would ever see their homeland.  Next stop was Cape Town, where they picnicked in the park surrounding the mansion built by Cecil Rhodes.  The Persic came into port at St. Vincent in the Cape Verde Islands, but the troops do not appear to have been allowed ashore.  On 25th July they finally anchored in Plymouth Sound.
Once disembarked, they boarded a train for their camp at Larkhill on Salisbury Plain.  Soon after they had settled in to their camp they were all given four days’ leave, and two extra days were given to those who wished to visit Ireland.  My grandfather’s parents had both been born in Ireland, and my mother told me that while overseas her father had visited (and kissed) the Blarney Stone, and also traced down some elderly aunts of his mother’s in her home town, known as “The Meeting of the Waters”.  This must have occurred at this period.  It was probably also at this period that the pictures of him (below) were taken. 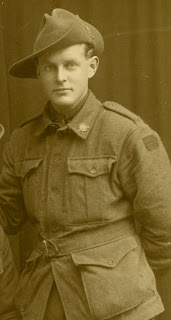 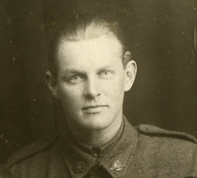 Salisbury Plain is, of course, the location of Stonehenge, and many of the soldiers took the opportunity to visit this iconic landmark.  Did my grandfather?  I don’t know.  I’d never heard about any of these places he saw before he went to the front.  They can’t have been traumatic, but the memories were locked away with all the others.
On the 27th September there was a divisional parade in front of King George V.  I never heard anything about this either.
On the 22nd November he proceeded overseas to France, ex Southampton.  “A” Company was sent to the front immediately.  This was during that incredibly severe winter of 1916-17.  My grandfather spent a lot of the war sick with pneumonia, chronic bronchitis and trench fever, but was lucky not to have been wounded.
Although they had been involved in raiding German trenches from their arrival at the front, it was not until June 1917 when they were involved in their first major battle, namely Messines.  The Captain under whom my grandfather served, Captain Robert Grieve, was awarded the Victoria Cross for his bravery during this battle.  The History of the Thirty-Seventh Battalion A.I.F. by N.G. McNichol, contains a facsimile of a letter from the N.C.O.s and men of his company written to Grieve to congratulate him on the honour, and among the signatures is that of Pte W. Spiller.
The 37th went on to fight in the battle of Broodseinde, the battle of Passchendaele and the Somme in 1918 amongst others.  In late 1918 the 37th was disbanded to provide reinforcements for other battalions, and on the 18th October 1918, less than a month before the end of hostilities, my grandfather was transferred to the 5th Battalion.
He returned to Australian per Soudan, arriving on the 29th July 1919 and was finally discharged on the 13th September.
We know so little about his experiences during the war.  I understand his need to put it behind him, but I still wish I had heard more.  The few things we were told was that at one period he had nothing to eat for three weeks except plum jam, and he would never eat plum jam again.  During one of the periods of convalescence from illness he was billeted on a French family and kept a photo of the daughter.  My grandmother used to tease him about his French girlfriend, and he’d crossly reply “she wasn’t my girlfriend”.  We also heard that after he was better he told the French farmer that what he had really wanted when he was sick was some fizzy drink (he usually had lemonade), and the farmer exclaimed, saying why hadn’t he said so?  They had hidden all the champagne in the cellar in case the Germans came along!
Those couple of anecdotes are such a tiny proportion of the experiences he’d have gone through during his two and a half years war service, yet they are all we will ever know.  I’m aware this is common with veterans, but it is frustrating for the rest of us.
Posted by jennyalogy at 11:58 AM 1 comment:

I promised people on the cruise that I would post the details of a book about Crew who deserted ships in Australia - how many people have you met who have been told that their ancestor jumped ship!

The book is called Ship's Deserters 1852-1900 and is written by Jim Melton.  It doesn't contain every single deserter, but it does contain a lot.

The other place to check for them are Police Gazettes - sometimes (not always) details of deserters being sought were published there.
Posted by jennyalogy at 1:02 PM No comments:

Something new about Australian Newspapers on Trove

I learnt something new about the Newspapers on Trove the other day.  Some of the entries have a little envelope at the bottom of their summary.  These are on entries that are "coming soon", which have been digitised, but are being checked before being made live.  If you click on the envelope you can enter your email address and then you will be notified when the article is made available.

Posted by jennyalogy at 7:23 PM No comments: