Transportation and Tickets of Leave

I just finished reading Chris Paton's "Lost: Transportation" article in the June edition of Your Family Tree (or Your Family History as it is branded here in Australia).  Very interesting, and I bet there are more than a few Australians who didn't know that convicted felons were transported to America before the War of Independence (not genealogists, of course

).  But there would be even more Australians (and perhaps Chris, too) who did not know that after America ceased to be a potential destination to off-load these convicts, the British Government decided to use West Africa as a place of transportation.


The exercise was a spectacular failure, mainly due to the high death rates due to tropical disease and the tendency of  the convicts to escape (often as crew on the slaving ships).  Thanks (at least in part) to this failure the Government then decided to start a colony in New South Wales.


For any who want to read more about this little known episode in transportation, Emma Christopher's book A Merciless Place should satisfy their curiosity.  A review of the book can be found at http://www.newsweekly.com.au/article.php?id=5015. 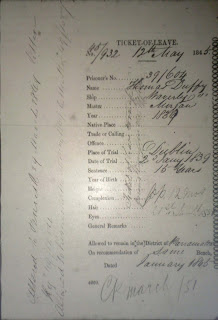 Chris also rather simplified his description of the Ticket of Leave system, but which a convict whose sentence had not expired could effectively be "out on parole".  The rules and regulations regarding the issuing of Tickets of Leave varied over time and from Governor to Governor, as did the amount of time the convict had to serve before being eligible to receive one.  These periods could be as short as two to three years at some periods.


There were some periods where no Tickets of Leave were issued, and male convicts seem far more likely than females to be granted one.  A terrific explanation of the Ticket of Leave system by Sid Hammell can be read at http://users.tpg.com.au/shammell/contents.htm.


For what it's worth, I have five convict and only one of them, Cordelia Knight who was transported for life, ever seems to have been granted a Ticket of Leave.  It was revoked 20 years later after she ran away, but she was given a Conditional Pardon shortly afterwards.