I recently read a book that had absolutely nothing to do with genealogy, but it lead to me having a Genealogical Epiphany – a light bulb moment, if you like.  It has completely changed my mindset about how to approach genealogy & genealogical problems. [I apologise for the length of this blog post – it is necessary, so bear with me].


The book is The Riddleof the Labyrinth: The Quest to Crack an Ancient Code by Margalit Fox. 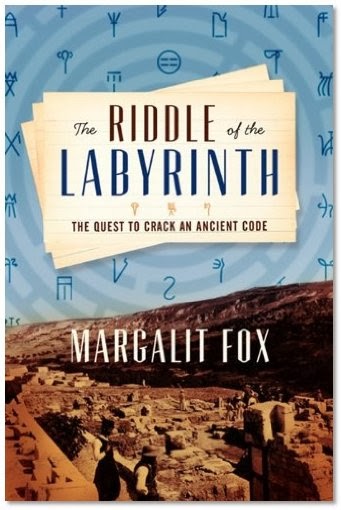 The book is all about the history of the decoding of the Linear B tablets from Crete.  Let me give you a little background.  In 1900, British archaeologist Arthur Evans found a number of inscribed clay tablet in the ruins of a Bronze Age Palace, which he declared was the Palace of King Minos.  The tablets had three different types of writing on them.  The oldest was a form of hieroglyphic writing which was unconnected to Egyptian hieroglyphics. The next they named Linear-A, and the final type they named Linear-B.  They all predate any known form of Greek writing (possibly any writing of any kind). It is just the last of these that have been deciphered. Scholars could not read the symbols on the tablets because they were small pictograms not used in any other known script (see below for a picture). To make matters even more difficult, they had no idea what language that were even written in. It can be hard enough to crack a code when only one of those things is unknown, but when both are unknown it unimaginably difficult.


Several people had theories about the scripts. Many people had developed ideas about which language they would represent (Etruscan, Hittite etc.) and tried to "force" that language onto the writings. In the 1940s an American woman, Alice Kober, set out to decipher the tablets. She was not the only one trying to do so at this stage. Other people (especially Arthur Evans) had been trying ever since they were discovered in 1900. She didn't even manage to fully decipher them before her death in 1950, but made such progress that an Englishman, Michael Ventris, was able to finally identify the language and decipher the tablets in 1952.


It is her approach to the problem that has led to my epiphany.


As I said, most people approached the tablets with pre-conceived ideas about the language they recorded, and attempted to prove their theory and use that to decode them.  Kober not only had a different approach, but she was total disapproving of those who were trying to use them to prove some theory or other.


Her approach was to let the data speak for itself.  She spent years and years collating how often each symbol appeared in conjunction with other symbols, what "words" there were that stated with each symbol, and so on.  Her meticulous work helped her identify male and female forms of certain words, and to identify that it was an inflected language, like Latin, where the word ending indicates which part of  speech the word represents in that sentence (i.e. subject, object, etc.). She made huge advances, and if not for her early death at age 43 would very probably have solved the riddle herself.


But I imagine you are wondering how this could lead to an epiphany. Well, it is "let the data speak for itself".  So often we come to a family history with preconceived ideas ('Grandma always said we were descended from Sir Walter Scott') or we have received a family tree from a relative who had "done it before" which we assume is absolutely correct.  It is easy for people to convince themselves that there must have been another child of so-an-so that did not appear in the parish registers when we either believe we are, or desire to be, related to a particular family. Even worse is the temptation to believe the published genealogies without verifying every step ourselves.  This is particularly the case with the pedigrees produced by John and Bernard Burke in the 19th centuries.  Most people seem to think that "Burkes" and "Burkes Peerage" are infallible sources of family genealogies.  In fact, nothing could be further from the truth.


The moral of the story is to try to remove any preconceived ideas from your head.  Study the data.  Use ONLY to data to reconstruct a family tree.  If that agrees with a published tree, or a tree sent to you by a relative, then good. Otherwise, trust the data.


Oh, and the book makes a fantastic read – I highly recommend it.
Posted by jennyalogy at 5:45 PM 2 comments: