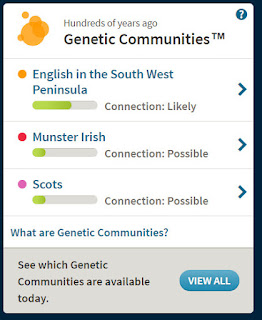 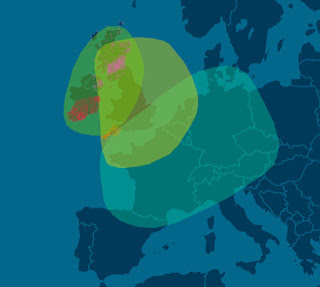 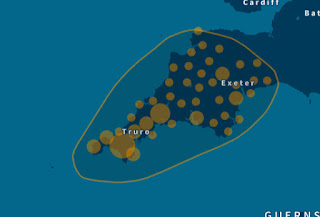 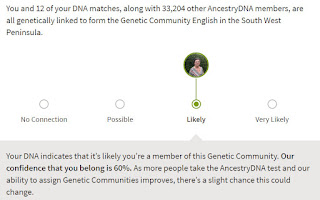 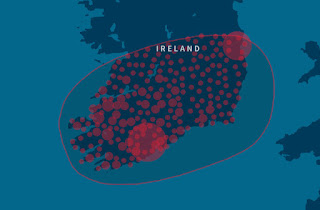 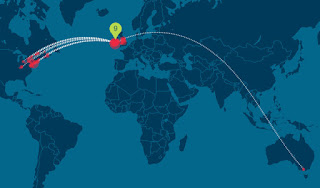 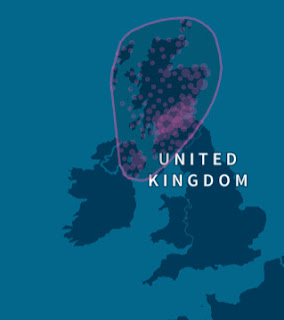 Posted by jennyalogy at 11:15 AM No comments:

I just got my results from Living DNA. Not only are they different to the results from Ancestry and FamilyTreeDNA, which are sort of similar, but the Living DNA ones don't match the paper trail AT ALL.  In fact, I'd be thinking that the results belonged to someone else, except they got my mtDNA haplogroup - H41a - correct, and that is a very rare subclade of a very common haplogroup.

LivingDNA says I am 98.8% European, Ancestry says 99%, and FTDNA says 95%. OK, they are similar.  They break down differently though. LivingDNA says that European component is 95.5% Great Britian and Ireland and 3.3% Scandinavian.  Ancestry threw Iberian Peninsula, Jewish, Italy/Greece and Finland/Northwest Russia into the mix, While FTDNA had the Jewish component, a Southern Europe (which I guess is about the same as Italy/Greece) and an East Europe (Finland?) portion.  The percentages were quite different, but the mix is similar

But where it gets interesting is with the British results.  Now I'll start by saying that according to the paper trail I'm about half Irish, half English with a tiny bit of Scottish thrown in (and that is from Wigtownshire - the most southwesterly part of Scotland). According to LivingDNA my results are broken down as follows:

The map indicates that Northwest England is Lancashire & Cheshire, Southeast England is Kent & Sussex. South Central England is Gloucestershire, Somerset & Wiltshire and that Northwest Scotland covers most of the Highlands, plus Antrim and Derry in Northern Ireland (two counties where I do NOT have ancestors).

My analysis of my ancestry is as follows:

Now, I fully understand that some of the smaller amounts might not have come to me by the miracle of recombination, as 3.125% represents a 3g-grandparent and all their ancestors, and 0.7181% a 5g-grandparent, but the differences are quite startling. I'm even happy to say that the 3.125% Middlesex probably came there from somwhere else. And even given that at least 2 lines of my Protestant Irish are known to have come from England (or Britain at least) in the 17th century, it's possible that all that 25% is really English or Scottish.  But what about that other 21-25% of Irish Catholics?

Putting my results into their categories we get

I really had higher hopes for these results, given that a lot of the data came from the People of the British Isles Study.  I'll just have to see how my husband's results compare to his paper trail.
Posted by jennyalogy at 4:49 PM 3 comments: