The recent news story about the lost Teddy Bear made me think about my own Teddy.

When I was growing up the Teddy Bear I had was already an antique.  It had been my father's before me, and before that it had belonged to his sister who had died before Dad was born.  I had him dated a few years ago, and was told he dated from around 1910 and was British.  Given that Dad's mother was born in 1909, he might have even belonged to her as a little girl. 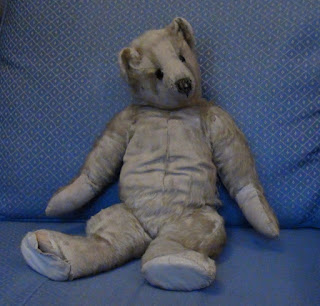 As you can see, he has been very well loved, and is rather bald now. Below there are some pictures of him with my father, when both were much younger.  I feel very lucky to have photos like this of Teddy. 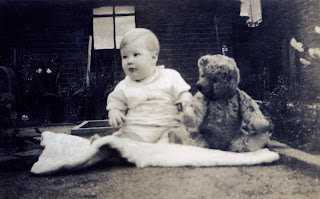 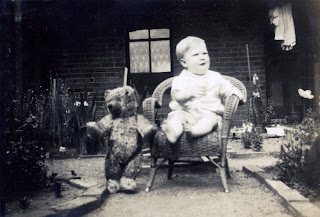 When my son was born I thought that Teddy had already been loved enough, and might expire if loved anymore.  Because I had such an old-fashioned Teddy, to me that is what a Teddy Bear should look like. Most of those that had that old fashioned look at that time cost of fortune, so I decided to make one for my son instead.  Needless to say, it was made with lots of love. 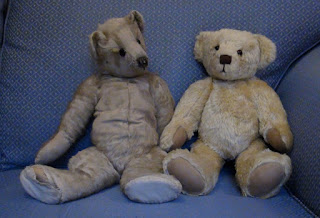 My son used to think of my Teddy as his Teddy's grandfather.  I think there is actually a family resemblance