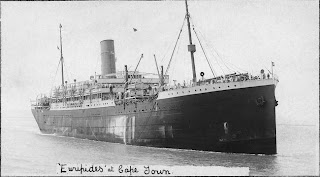 
The cause on his death certificate was "Cerebral Haemorrhage lasting 2 hours", and it is considered to be related to his wound at Gallipoli, so his widow received a war widow's pension until her death in 1981.
Posted by jennyalogy at 3:16 PM No comments: