The Biographical Database of Australia is now live.  I have been playing around with it a bit and looking at a few of my ancestors.  So far most of what I have found I had already looked at, like convict indents, musters and the 1828 census. 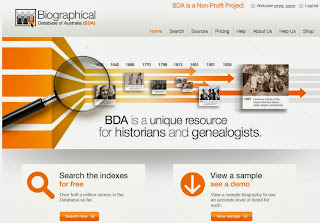 But there is a possible death for my NSW Corps ancestor, Joseph Quinn.  Joseph was a private who arrived on the Earl Cornwallis in 1801, was discharged from the army in July 1802 and at some point married Elizabeth Boardman, a former convict who had also arrived on the Earl Cornwallis.  No record of this marriage has ever been found, nor any baptisms for their three children (Patrick born c1808, Elizabeth born c1810 and John born c1814.  This is not surprising, as they were Catholics and between 1804 and 1820 Catholic Mass and church services were not able to be legally celebrated.  Joseph's wife died in 1829 and is buried in St Peter's Church of England in Richmond. After this nothing is known about Joseph or his son Patrick, though the lives of his other two children are well known.


The BDA has come up with a death in 1829 at the General Hospital in Sydney of a 32 year old Joseph Quinn, whose burial was recorded in the records of St Mary's Roman Catholic Church, Sydney.  Now the age doesn't match other sources (the 1828 census says he is aged 60) and I don't know how he would have got from the Richmond area to Sydney, but I still think it's worth further investigation (like trying to find the hospital records, if they still exist.


There is also a marriage of a Patrick Quinn and Elizabeth Browne in 1830 at St Mary's, which also warrants further investigation.


Without the BDA I would not have found these leads as it wouldn't have occurred to me to look at St Mary's registers for people I last knew as living in the Richmond area.


The site is easy to use, and the indexes can be searched for free. A yearly subscription which shows the results of those searches is just $25 (possible because the BDA is a non-profit project).


The Biographical Database of Australia can be accessed at http://www.bda-online.org.au
Posted by jennyalogy at 4:38 PM No comments:

Family History Conference in Canberra - report on the main talks


Here are some selected comments on the first day of lectures in the 2013 NSW & ACT Association of Family History Societies' Conference. I have not commented on everything, nor attempted to report everything that was said, because if I do I will never get around to posting this report.
The presentation by Chris Boyack on what’s new in FamilySearch didn’t tell me much that I hadn’t already seen or knew was coming (through reading blogs) except that in the future you are going to be able to add not just photos and stories to people on your online family tree, but also documents “like certificates”.  Those were his words.  I have serious concerns about that – certificates are copyright and cannot just be posted online without permission.
Martin Wood, maps curator from the National Library of Australia, spoke about using maps.  He started off with the comment that maps should be the first thing people look at, but are usually the last. He also told us that the National Library are in the process of digitising many of their out-of-copyright maps. These include the NSW parish maps, and in some cases these are different dates than the version on the Land and Property Information web site. The maps that have been digitised can be accessed through the NLA catalogue - restrict the search by selecting "maps" and looking for those online.
Gail Davis's talk on Education and school records in the State Records of NSW was full of information as usual. In fact it was so full of information that I missed taking down some of the details.  The main thing to remember is to consult the various Archives In Brief (numbers 9, 26, 76) and Short Guides 6 and 10 for all the details.  I really enjoyed her talk, and got a lot out of it (even if I couldn't write down all the dates at the time), but I did hear someone near me say that they hadn't enjoyed it - that it was just too much information too quickly and that they didn't like her presentation style.  I guess that just shows that everyone has different methods of learning.
The conference dinner on the Saturday night was really well done - one of the best I have attended. The table decorations were fantastic and all in keeping with the conference logo colours and images.  The food was really good, as was the entertainment, and I had good company at my table.
My favourite talk of the whole conference was Angela Phippen's talk on Royal Commissions and Legislative Council Select Committees. It sounds like these would be boring and contain no information of value, but nothing could be further from the truth. Angela gave examples from five Royal Commissions: one into the Lunatic Asylum in Gladesville from 1846; one on noxious and offensive trades from 1882; a report from the committee on immigration from 1835; a report on the condition of the working classes of the metropolis from 1860; and a report on alleged Chinese gambling and immorality from 1892.  This was covered at a much faster rate than Gail's talk, so it wasn't possible to take down all the details. But fortunately Angela had given us a handout with the details of the five reports she had covered and also the finding aids.  The main point was to illustrate what a wonderful resource this can be, and how a dull title might be hiding invaluable information that appears to have no connection to the title.
The final couple of highlights I want to mention are Cora Num's talk on Women migrating alone and Angela's on Women and Divorce.  Both were excellent.
Before we knew it the conference was over for another year and it was time to say good bye to those people that we only meet at these sorts of events.  Can't wait for next year's conference.
Posted by jennyalogy at 6:24 PM 1 comment:


Now I have a bit of time to write about the NSW & ACT Association of Family History Societies Conference in Canberra.
The first day was a family history fair, along with some talks.  There were free 15 minute talks on the main stage, along with three other talks that had to be paid for.  One of the latter which I attended was the Trove Masterclass.
This was a fantastic learning experience.  It was a masterclass, not a beginners class, and although I knew some of what was spoken about, there was still plenty for me to learn. One was Lists. You can use lists to accumulate pointers to items in Trove that you are interested in relating to a topic, and also to live web sites (but not the archived web sites on Trove).
The other thing that I was unaware of were the RSS feeds that can alert you to new newspapers being added or new editions of existing newspapers.  This feature can also be used rather like a Google Alert, in that it can tell you about new results of a specific search.  This is fantastic, as it means you don't have to keep repeating a search and looking through results that you have already seen in order to find any new material.
I also picked up some ways of improving a search:
I also listened to one of the main stage talks - Gail Davis from the State Records of NSW talking about How To Find NSW Court Records. As always, it was a fantastic presentation, though a little rushed, given that she had such a short time slot.
Apart from those talks I spent the day looking at the stalls and spending some money, mostly on second hand books.
Posted by jennyalogy at 5:16 PM No comments: 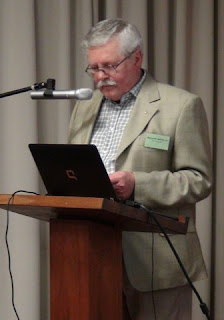 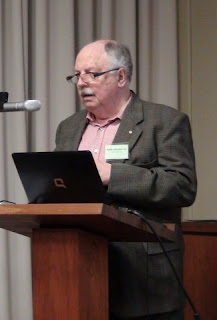 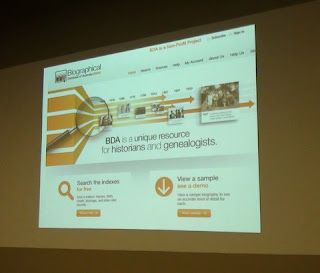