Maps from the City of Sydney Archives

It's been a long time since I posted anything on my blog, having been tied up on a jury for 6 weeks and then having spent the last 2 weeks trying to catch up, but at last, here we are


The value of maps for genealogists has often been overlooked.  One of the fantastic sources of maps for NSW is the "Historical Atlas of Sydney", put online by the City of Sydney Archives. (http://photosau.com.au/CosMaps/scripts/home.asp)


The maps on this site are not limited to just maps of the Sydney Central Business District, but also include maps of some of the suburbs of Sydney.  The detail in some of these maps is fantastic.  Just look at this extract from a Fire Underwriter's plan dating sometime between 1917 and 1939.  James Greenhalgh did not live in the City, but his business, Greenhalgh's Pty Ltd, had an office at 9 Phillip St.  This map shows me the size and exact location of the building that his business occupied. 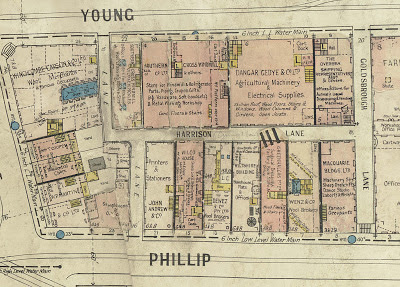 In another map, this one of the Rocks & Foreshore Resumption, we can see the property (146 Cumberland St) where my great-grandfather, John Lawrence Gibbons, and his family lived at the time.  The map identifies that the property was owned by A.M. Caraher and F.J. Gillespie and that a couple of doors up, on the corner of Long's Lane was a Hotel.  I know from the Sand's Directory that this was the Erin-go-Bragh hotel. 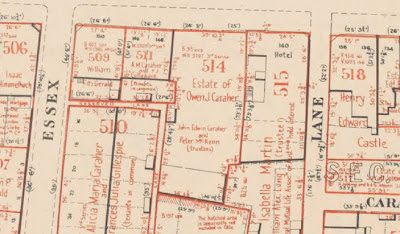 Posted by jennyalogy at 4:53 PM No comments: