He wants to be found

I am being haunted.  Haunted by an unidentified soldier from the Australian Army in World War I.  I think he's haunting a genealogist because he wants to be found and given his name.

When I was at Rootstech two years ago I wandered past The In-Depth Genealogist's booth and my eye was caught by a picture of an unidentified Australian Soldier on the cover of one of their issues of "Going In-Depth".  There is no doubt that he was Australian as he had the rising sun badge on his collar. 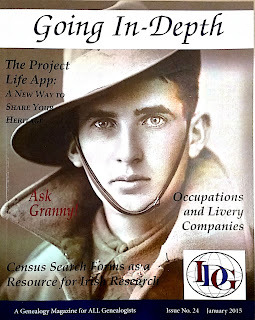 It was most unusual to see an Australian on the front of a magazine, so he stood out.  But that wasn't the end of the story.  I got home to find that amongst the bookmarks I have picked up over the years was another copy of the same picture.

But it didn't stop there.  When I was visiting the Australian War Memorial the following month, I saw a book in the bookshop with him again. 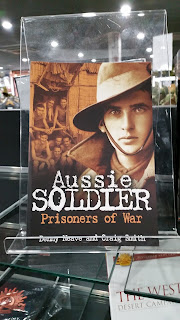 And then he featured in a controversial ad campaign for a local supermarket chain. (They call themselves "The Fresh Food People" and this image was accompanied by the message "Fresh in our Memories".  The Australian people did not like the sacrifice of all those young men being turned into an advertising slogan). 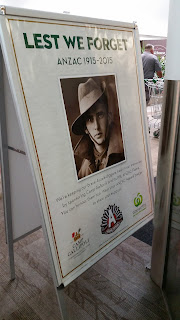 I thought it had finished until I went to RootsTech again this year.  There he was, staring at me from the Family Tree Maker booth. Admittedly, they have reversed the image. Very annoying for any Australian who knows that the slouch hat is always worn with the turn-up on the left side. 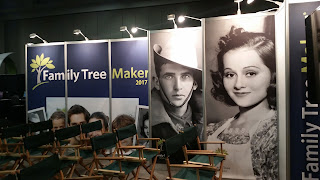 And it turns out he is on the cover of the disk for the latest version of Family Tree Maker! 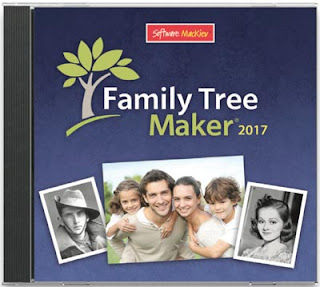 I think he must want to be found.  He has incredible eyes.  Anyone able to identify him? Below is a copy of the original photograph from the Australian War Memorial's Flickr Photostream. 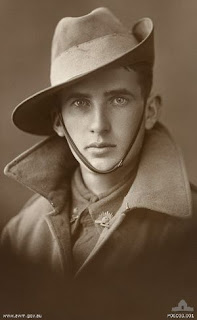