The first day of the Sydney Unlock the Past Researching Abroad roadshow kicked off at the Parramatta RSL with Dirk Weissleder talking about German and European Research. Over the day he gave several talks with several useful messages.

Dirk started by acknowledging that German research is difficult,  even for Germans.  Archives are spread far and wide, and just one example is that there is not one National Library,  but two: one in Frankfurt am Main for the old West Germany, and the other in Leipzig for the old East Germany.

He made a very important point that needs to be kept in the forefront of your mind. Germany as a country only came into being in 1871. Before that it was several independent kingdoms and duchies. Then after World War II it was split into two separate countries: East Germany ans West Germany, and wasn't reunited as a single country until 1990. So when looking at or for something always ask yourself what country that place was part of at the time in question.

It is also important to bear in mind that there is a different mindset prevalent in Germany (and also in other European countries) than that in England or Australia. One example is that Germans all have to carry ID cards, and cannot understand how society can possibly function in the UK without them. There are also different perspectives throughout Europe over how easy or quick access to records should be and whether they should be available for free or only for a fee, and whether or not photography of records is allowed.

Another thing to be aware of is that throughout Germany graves are reused, often after 25 years, but as quickly as four years in Munich. Therefore if you go to a graveyard you will not be able to find the graves of your ancestors.

It is important to keep these different perspectives in mind, and research in advance what you are likely to find and what conditions will be attached to it.

The second day was a British Isles research day, with talks by Chris Paton. His first talk was a beginner's guide to British and Irish Genealogy.  Even for someone who was not a beginner I think there was much to gain from this talk, with some good advice about brick walls (try going around them, not through them), and the advice that we should question everything.

His next talk was about Scottish Church Records.  In case you are not aware, there were many, many changes and factions within the history of the church in Scotland. Chris compares it to the Hokey Pokey (which appers to be called the Hokey Cokey in the UK) - They put the Bishops in, They took the Bishops out, Bishops in, Bishops out, shake it all about ....

Chris's website has a brief outline of the history of the Scottish Kirk here: http://www.scotlandsgreateststory.bravehost.com/scottishkirk.html

Chris's third talk was on Irish Family History resources online. This talk was a great illustration of the fact that while Irish Genealogy was difficult in the past, there is now a great deal online, making it a much easier undertaking.

His final talk was about Discovering Irish Land Records.  For those not experienced in Irish research, one of the most difficult aspects can be understanding the various land divisions, like townlands, baronies and so on.  Consequently the first part of this talk was dedicated to describing these different boundaries. He then went on to explain how to find out where your ancestors were, where to find records of tenancy, ownership & valuation, and a few other points to help fill out our understanding of where our people lived.

The two day roadshow also had a few other presenters: Kerry Farmer did a talk on using DNA to solve genealogical puzzles, which was excellent (as Kerry's presentations always are); Heather Garnsey from the Society of Australian Genealogists did a couple of presentations on the holdings of the SAG for European research and for British Isles research; and Rosemary and Eric Kopittke each did a presentation on MyHeritage. These were really just info-mercials, but I guess that was what MyHeritage, who was a sponsor of the roadshow wanted, and it is something we have to accept from a sponsor, because this keeps the price down for the attendees.

Keep an eye on the Unlock the Past website for future events.

**Disclosure:  As a roadshow Ambassador I received free admission to this event
Posted by jennyalogy at 11:23 AM No comments:

It's always exciting when we get the chance to hear overseas speakers here in Australia.  And the Unlock the Past Roadshow is once again giving us just that opportunity.  Chris Paton and Dirk Weisleder are doing a series of talks around Australia, coinciding with National Family History Month.

The tour is entitled Researching Abroad: Finding European and British Isles Ancestors, and will be visiting Brisbane, Sydney, Melbourne, Canberra, Adelaide and Perth. 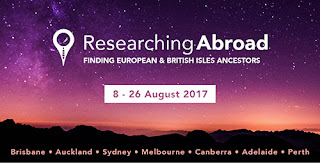 The talks last for two days, but you can chose to attend just one day, or both. Each location has a slightly different program and some additional speakers, so check out the program for the location closest to you at http://www.unlockthepast.com.au/events/researching-abroad-finding-british-isles-and-european-ancestors.

In Sydney, for example, the speakers also include Kerry Farmer, who is giving a talk on Using DNA to solve genealogical puzzles.


Chris Paton is a professional genealogist based in Scotland, but born in Ireland. His business is called Scotland's Greatest Story https://scotlandsgreateststory.wordpress.com/. I have heard Chris speak on several different occasions and he is a knowledgeable and engaging speakers, and sometimes also a very humorous one.  I have never come away from one of his talks without having learnt something.


Dirk Weissleder from Germany is the National Chairman of the Deutsche Arbeitsgemeinschaft genealogischer Verbände, the umbrella organisation of the genealogical and heraldic associations in Germany. He is also the coordinator of the German-Australian Genealogy Alliance and thee International German Genealogical Partnership. I have never heard Dirk speak, but Jill Ball interviewed him at Rootstech this year.


Why not think about coming to the roadshow this year. More details are available here.

Posted by jennyalogy at 2:23 PM No comments: