The recent release by Ancestry of Warwickshire Occupational an Quarter Sessions meant that I found something about my 4xg-grandfather Thomas Moore and his father, John Moore.  The family lived in Preston Bagot in the picture-postcard manor house there.  As far as I knew they were just farmers, but now I know that they were also gamekeepers, appointed by the Lord of the Manor – William Mills in the case of Thomas and John Mills in the case of Thomas's father.  This gave them the "power and authority to kill the Hares Pheasants Partridges and all and singular other the Game upon the said Manor".  I believe the family had lived in Rowington before they moved to Preston Bagot.  John Moore had married Martha Oldham of Wasperton in 1775, and their son Thomas married Elizabeth Anchor in 1807.  Their daughter Sarah (my 3x g-grandmother) was the family member who came to Australia with her sister Martha and Martha's husband, Michael Steel, in 1845. Sarah married John Highett in Van Diemen's Land the following year. 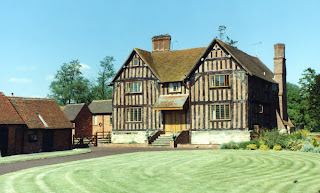