Yesterday was the start of Rootstech 2013.  The day started very early as bloggers were given a special tour of the expo hall and then shown to specially reserved seats in the main hall where the keynote talks were taking place.  It had actually been snowing outside, after having been a glorious sunny day two days before and only overcast on the previous day.  Fortunately, since I was staying at the Radisson which is right next door to the Salt Palace Conference Centre I could just put up with the cold and snow for the two minutes it took to get between the two, and thus not have to lug around a coat for the whole day.
The conference has 6700 registered attendees, and on the Saturday another 1900 young people will be coming in for a special youth stream of the conference.  That is a LOT of people, as the crush to get out of the hall after the keynotes attested.
Shipley Munson, head of Marketing for Familysearch International welcomed the attendees and then introduced each of the speakers.  The first of these was Dennis Brimhall, President & CEO of Familysearch.  His message was that Family History is all about family, and about those stories associated with the family.  Without them family history is only names, dates and places.
Dennis entreated us to ask ourselves what our great-great-grandchildren  would wish that we had done.  This would probably be to record the stories that are happening now, or have happened in our lives.
Dennis told us a story from his family, about his father’s experiences in World War II, when he was in a plane that was shot down over Germany.  His father was one of only two people to survive from that plane, and amazingly, someone from another plane had taken photos as the doomed plane burst into flames and plummeted to the ground.  Dennis’s father had not told him anything about this, but his daughter asked her grandfather about his experiences, and wrote a book about it, which meant that these stories would be preserved for the family.
The second speaker was Syd Leiberman, who told us stories about his family.  He was a great speaker and the audience really went with him to the places and events that he was talking about.  The final speaker was Josh Taylor, lead genealogist, findmypast.com. 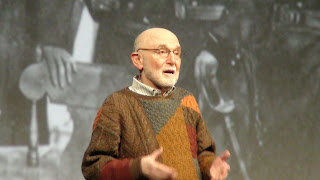 Syd Lierberman giving his keynote address
Posted by jennyalogy at 5:09 AM