The winning entry for a RootsTech pass

Well there were some terrific entries for my competition, and I've enjoyed reading about your ancestors and what they might have said on social media.  But there can only be one winner, and the prize of a free RootsTech registration valued at US$299 goes to Rosemary McKenzie, from Canberra in Australia.  Her entry is below:

Jane Elizabeth Walsh was my 3x great-grandmother. Born in Ireland around 1805 she arrived in Hobart in 1833 aboard the Edward Colston with 29 other females. Three months later she married Paul Milkins, a conditionally pardoned convict, working in Campbell Town as a constable. They had three children in Tasmania, one died young, and another after moving to Victoria early 1841. Paul’s absolute pardon was awarded in July 1840. They lived in and around the Geelong area and Paul died in 1877. On his death certificate he was listed as a widower, but I have not been able to find any record of Jane’s death between 1841 and 1877. 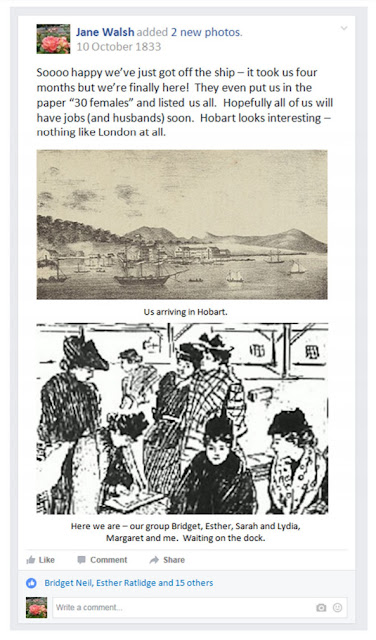