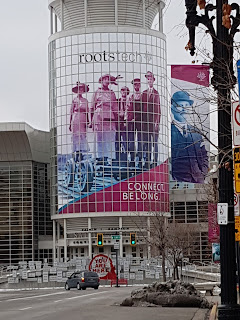 When registrations opened at Midday on Tuesday over 14,200 people had registered. There were representatives of every American State (the first time this has happened) and 42 other countries.  There are 197 exhibitors (and 60 of them are new companies) and over 300 classes. Not surprisingly, the queues for registration were loooooong.

The lectures started at 9.30, and many of the sessions were completely full, they were so popular.  But it’s not as if there weren’t plenty of other classes to choose from – there are about 25 concurrent streams!

Time to blow my own horn. After lunch it was time for me to give my talk on the Registry of Deeds in Ireland. It was in a room with a capacity of 228 people, and there were probably less than half a dozen seats left when I started.  I got plenty of good feedback, which is always reassuring.

The “official” opening was at 4.30pm. Jason Hewlett was once again the MC (or Emcee as he has on his splash screen). As well as entertaining us with a song, he got the audience to open up the FamilySearch app on our mobiles and click on “Find my relatives at RootsTech” the app would process for a little while, and then show you a list of your relatives at the conference based on the trees that we have uploaded to FamilySearch FamilyTree.  I had lots of relatives, but the closest was a 4th cousin who is related to me through my Manning ancestors from Co. Wicklow. We have met up and when the chaos of RootsTech is over we’ll be able to stay in touch to concentrate on our shared ancestors.

Steve Rockwood was the keynote, and talked about the conference theme of “Connect. Belong”. He said that FamilySearch wants people to connect (like we did with the app mentioned above), because when we connect we treat each other differently. Connections can generate emotions, as with the discoveries LeVar Burton made last year which brought him to tears.

The connection process starts with Discovery. While research bores most people (but not genealogists!) the discoveries that the research leads to can really excite people. DNA testing is a booming area, and most people are coming to it with a sense of discovery.

Steve then highlighted the need to gather and collect the records before it is too late. Not just the records in archives and repositories, but also the records (and memories) at risk in our families. Steve’s son videoed his grandfather after that man had been diagnosed with terminal cancer, and the answers he gave to the questions that were asked form a precious part of their family archive.

Steve summed up his message again: “It matters because when we connect we treat each other differently.” 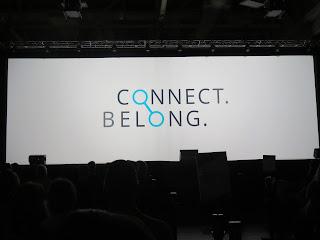 Disclaimer: As a Rootstech Ambassador I receive complimentary admission to the event, invitations to some extra events and dinners and a free registration to give to one of my readers. I bear the cost of my return airfares from Australia and pay for my accommodation and meals.

Posted by jennyalogy at 7:08 AM