The Thursday morning RootsTech session featured Brandon Stanton of Humans of New York as a keynote speaker. Over seven years, Brandon has photographed and interviewed more than 10,000 people. But the route to that position was full of many changes of direction. Brandon told us about his life, starting with flunking out of college, when he hit rock bottom and felt like a total failure. He felt he should be doing something meaningful with his life, but didn’t know what. Eventually he went back to college, got straight “A”s, and fell into a good job in a financial company. For two years he thought about the markets constantly, their movements occupying his mind 24x7. He had a sense of importance from doing something people respected. Then he lost his job.

Brandon asked himself “what do I want to do?”. He came to the realisation that he had been so busy holding onto his sense of self-importance that life had been passing him by. So he decided that he wanted to make just enough money to allow himself to choose what to do with his time.

He bought a camera and started taking photos of people. Initially it was a frightening experience, just taking the photos, but over time Humans of New York evolved and became more about the stories. Brandon has now started travelling the world and some of the people he has photographed have so inspired his readers that they have crowd-sourced funds to help them.  In fact his audience has crowd funded over $10 million for a variety of causes.

Brandon has now reached a point where he says he can choose the work he want to do. But he stresses that he chooses the work, and doesn’t choose not to work, because “following your dreams correctly is nothing but hard work.”

Friday’s keynote speaker was Olympian figure skater Scott Hamilton. Adopted at just 6 weeks old, he joined a family that clearly meant so much to him. He had very bad health as a child (which he claims is the cause of his short stature) and went to skating lessons as a way for him and his family to do something to get their minds off his illness. Eventually, after many ups and downs, this led to him winning gold at the Sarajevo Olympics in 1984. 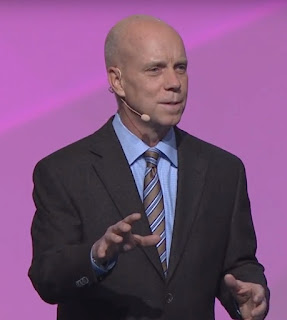 He overcame testicular cancer and was unsure whether he’d ever be able to have children.  Nine months and 2 days after his marriage his son Aiden was born.  For the first time he looked at his own flesh and found the moment overwhelming.  When his red-headed second son, Maxx, was born Scott suddenly decided that his unknown heritage must surely include Irish ancestors. This afternoon he will get to find out as FamilySearch staff have researched his biological background and will tell him about his ancestry.  Scott and his wife went on to adopt two children they had met when they were working with the disaster relief after the Haiti earthquake, allowing him to give back something important to other adoptees: a happy family. But health problems hadn’t finished with him. In 2004 it was announced that he had a benign brain tumour and needed risky brain surgery. But still he remains happy and positive.

He finished up with these words, which resonated so much with every genealogist listening:

“Our past is the foundation of everything that comes off it. For without a past we have no future.”

Disclaimer: As a RootsTech Ambassador I receive complimentary admission to the event, invitations to some extra events and dinners and a free registration to give to one of my readers. I bear the cost of my return airfares from Australia and pay for my accommodation and meals.