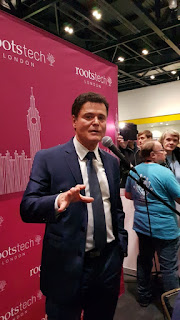 Saturday’s keynote was the Peter Pan of music: Donny Osmond.  I’m not saying that he isn’t grown up, it’s just that he hasn’t grown old. At just under 62, he looks no older than mid 40s. Yet he has ten grandchildren and a career in the music industry spanning five decades.  This didn’t always look like it would be the case. When he was 21 he was told that his career was over, that he was a “has been”. He is glad he didn’t listen to those advisors.

When you study your family history you learn which side of your family bequeathed you not only your hair & eye colour, or nose shape, but also out attitudes and character traits. And he credits the tenacity, the work ethic and the “never say never” attitude he got from his ancestors with giving him the determination to keep going in the fickle music industry. Donny told us the story of his life and of those ancestors.

Elizabeth Williams, his great-great grandmother from Wales, is one of those influences. She had grown up in Wales, and then converted to the Mormon faith and moved to the States, where they lived in a two-roomed log cabin.  She never went to school, and couldn’t read or write, but she was determined to do what she could to give her children an education and a better life.
The other ancestor whose attitudes influenced him enormously was called Virl. He lost his father when he was just six weeks old, had two step-fathers over time, and was kicked out of home by one of those step-fathers when he was just a teenager. He went to the local store to see if there was any work, but there wasn’t. So he asked to storekeeper if he could borrow a broom. Every day he swept the porch clean and greeted every customer. At night he slept on that porch. He was in survival mode, living on just bread and milk. Occasionally he would get hold of some tomato ketchup and add it to water, calling it tomato soup.

Virl eventually married and the couple’s first two children were born completely deaf. The doctors advised them not to have any more children. But they went on to have nine children, and Donny was the seventh of those.  From six-weeks of age, Virl had prevailed over all sorts of adversity and subsequently did all he could to make sure his children had a better life.

We inherit our personality, attitudes, creativity and sense of humour from our families, not just our DNA.  Donny has been in a unique situation in that almost his entire life has been lived out in the public eye and documented and recorded. But we need to make sure WE document the stories and experiences of OUR lives, no matter how quirky or funny, and we should document them before time runs out. Your descendants deserve to know who you were, what you were like and what you experienced. The most insignificant thing to you could be the most valuable to your descendants.  Donny told us how he keeps a file of the baby-words his children used to say.  I keep one too, though my son would kill me if I ever shared it outside the immediate family. One day he may feel differently.

Posted by jennyalogy at 5:22 AM