Walk the ground your ancestors walked to truly understand them 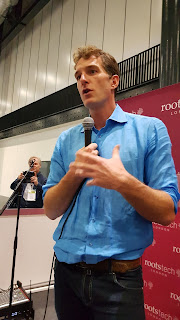 The keynote speaker for the first day of RootsTech London 2019 was TV historian Dan Snow. He told us that we are all here because of history, we are all a little part of a great continuum from the past to the present. Growing up, history was a big part of his family life. His childhood was spent visiting historic places and cemeteries, and his love of history developed. Even more influential was his maternal grandmother: an Indian-born Welsh woman living in Ontario and married to a Scot.  When he was young all her grandchildren would visit and at night she would tell them stories about their family. She told them they were descended from King Arthur, Llewellyn and Owain Glendower.  While this may not be true, it did instil in them a love of history, and their family’s history.

She told them stories about their ancestor who started in very humble circumstances in north Wales and became the only Prime Minister of the UK for whom English was a second language: David Lloyd George.

Dan’s father was descended from a man who hated Lloyd George: Lt General Sir Thomas Snow. Snow was in charge of a section of the line on the first day of the Battle of the Somme. That section was highly unsuccessful in their goals and suffered huge casualties.  While the battle was going on Snow was safely miles behind the lines in a Château, completely out of contact with the reality of what was going on.  His men advanced to enemy lines, and then got caught behind the enemy. They fought bravely, once their ammunition ran out they used their rifles as clubs and then their fists. The majority of them died. General Snow reported “I regret to inform you that the men lacked offensive spirit.”

While Dan did not feel that his great-grandfather was anymore culpable than any of the other British Generals, it is this one statement that he is ashamed of. Having had the opportunity to be in that château, and to read the journal and letters that his great-grandfather wrote in the place that he wrote them was a powerful experience. To actually walk the ground that your ancestors walked, to be in the places and buildings that they were in brings it all to life. On our family history journey we will find people who were deeply imperfect, and events that were unpalatable. But this is all part of that continuum of history and part of what made us who we are.

Dan's talk was live-streamed and will be available on the RootsTech website soon.


Disclaimer: As a RootsTech Ambassador I receive complimentary admission to the event, invitations to some extra events and a free registration to give to one of my readers. I bear the cost of my return airfares from Australia and pay for my accommodation and meals.